What Don’t We Often See?

I don’t know much about surfing. I’m not the type.

But recently, I had an opportunity to walk the length of the Naples (Florida) Pier and there were a few surfers there celebrating the incoming waves. The pier offered a unique top-down perspective on their efforts and so I tried to capture their successful attempts at riding in on one of them. It was interesting. It was surprising.

My assumption about surfing is that it’s an exciting, pulse pounding endeavor. That it’s not for the faint of heart and that the action is typically non-stop. What I witnessed was something else, however.

I saw two men waiting. For long spells. They watched the waves approach and worked to position themselves to that exact spot where they believed the proper crest would allow for success. Far more often than not, they were wrong. They arrived slightly too early or too late or were positioned just a bit too far one way or the other. In some rare instances, they hit it just right and then had to work to stay on their boards. Often, they crashed, were swept up into bubbling foam and cursing spray.

From a payoff perspective, it all seemed like slim prospects to me. A lot of work for a small bit of reward.

But they kept at it. They worked. They were patient. And, as I awaited the coming sunset on the western sky, they persisted.

From afar, my experience of surfing has been about the excitement, the action, the adrenaline pay dirt. I see the fun, I see only the highlight reel.

But what I never see is the waiting. The patience. The work. The effort.

This makes me wonder about all of the other things I’ve experienced only from the surface, skimming across in superficial manner. What else have I witnessed only at its peak without ever truly seeing the climb, the falls, the failures, the patience, the work.

Reminder to self: try to see beneath the surface, beyond the highlight reel. There’s usually something worthwhile in there too… 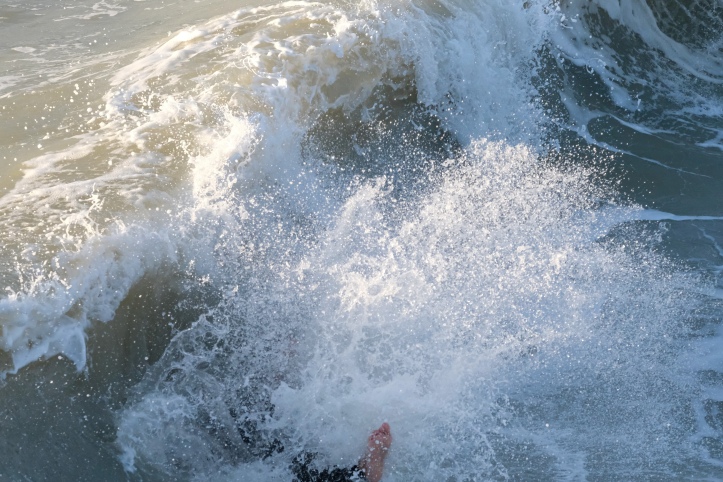 “The world is a complex place and the role of the photographer is to simplify, to make it understandable, to make it more comprehensible.” — Brooks Jenson #springflowers
The magnolia tree flowers are my favorite. They welcome in the spring season each year and only last a few days. #spring #magnoliatree
“It is never too late to be what you might have been.” — George Elliot #fujifilmx100v
“The ocean of life flows between calmness and storms, honoring the truth that down moments are common and natural will help us let go of resistance so that we can pass through difficult times with less tension and use them to gain more wisdom.” — Yung Pueblo #fujifilmx100v
“I feel so strongly that deep and simple is far more essential than shallow and complex.” — Mr. Rogers #fujifilmx100v #spring
“A prayer without a deed is an arrow without a bowstring; a deed without a prayer is a bowstring without an arrow.” — Ella Wheeler Wilcox #fujifilmx100v #spring
Loading Comments...
Comment
×
%d bloggers like this: