Attempt 10 – Pick Up Your Cross

“Then Jesus told his disciples, “If anyone would come after me, let him deny himself and take up his cross and follow me.” – Matthew 16:24

I have heard this quote from Jesus in the Gospel of Matthew before. It can be interpreted in a number of different ways, but this morning in Mass, as I was staring at the carved face of Jesus carrying the cross, a new idea struck me. 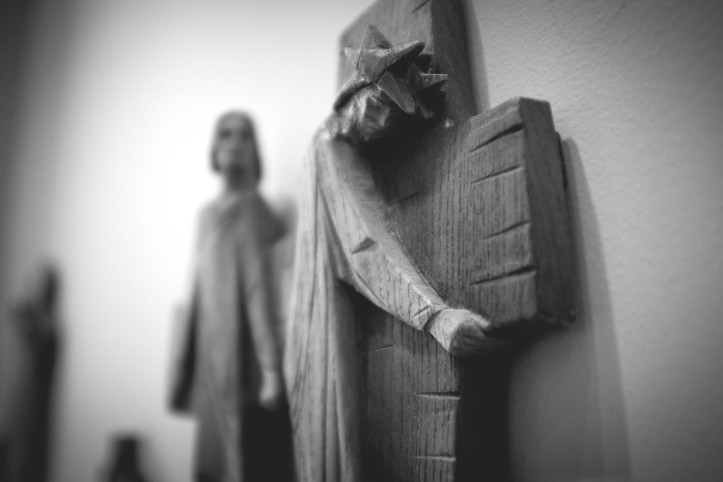 Jesus was handed a cross and told to carry it. He was told to carry it to the place of the skull, where he would then be killed upon it. How do you think he felt about the beams of wood he was hauling through the streets of Jerusalem? The cross was used as an instrument to torture Jesus, a heavy burden he had to labor to transport, and ultimately the instrument used to end his earthly life. If I were Jesus, the cross would have traumatized me.

Yet, the Church (that Jesus founded) chose to lift high the cross, to praise it, and to look to it for hope and inspiration. A symbol of death and misery was turned into a sign of life. Jesus did that. Jesus shouldered the cross, he carried it, he allowed himself to be nailed to it, and then finally – he transformed it. He made it new, and in doing so, showed us the way.

When Jesus tells us to pick up our cross and follow him, what does he mean? Like I said, I think it means a number of things, but to me this morning, it meant this. Like Simon, the man tasked with helping Jesus bear the weight of the cross, we are walking through life and are sometimes called to shoulder tremendous burdens. But did Simon help Jesus carry the cross, or was Jesus helping Simon? Similarly, when Jesus instructs his disciples to take up their crosses and follow him, could he be telling us to accept the challenges in our lives, to work through them and that he is with us, every step of the way?

If that is the case, then I am eager to pick up my cross and follow, for Jesus can take all of our burdens and make them new!