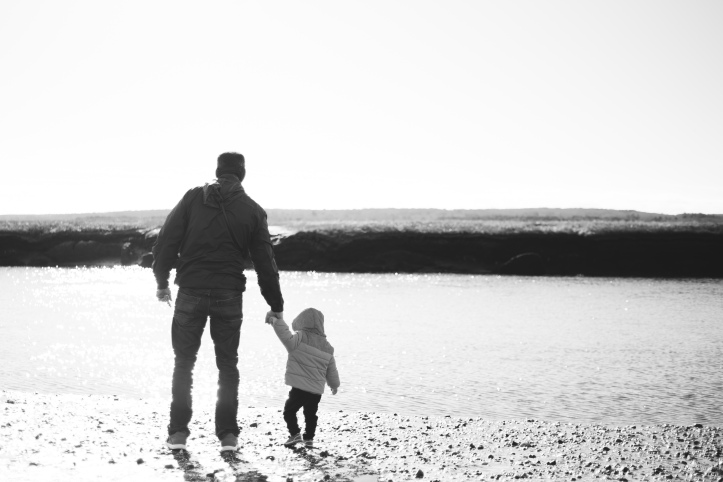 “Within the conjugal and family communion-community, the man is called upon to live his gift and role as husband and father [67]…In revealing and in reliving on earth the very fatherhood of God, a man is called upon to ensure the harmonious and united development of all the members of the family… [73-74].” – St. John Paul II, Excerpt from: Familiaris Consortio: An Apostolic Exhortation on the Christian Family in the Modern World, (see here).

In our last look at St. John Paul II’s work, we explored the sacrament of marriage as power. In the very giving up of our lives, we have access to this power, through grace, by completely and fully loving another. This “agape” is disinterested in the self and is completely oriented toward the good of the other.

With this notion, and being married for a couple of years, I never thought love could go deeper. I couldn’t imagine living for someone else so completely and forgetting about myself so quickly.

That is, until, about 18 months ago. Something big happened. Someone entered our lives and changed it dramatically, forever.

Stop me if you’ve heard any of these before:

“We are going to wait to have kids – we want to travel, save money, and build our careers firsts. We will probably only have one kid.”

“I want to be able to go out with my buddies on the weekends, enjoy the game. I can’t be tied down, I’m too young. We use contraception.”

“Having kids is expensive and draining. Diapers, extra food, school, activities, camps… and I haven’t even mentioned college! No way, I’d rather keep my money!”

“I see how stressed parents are. Running around, constantly feeding their kids, worried about naps, tending their every need….way too much for me to handle!”

You get the idea.

Okay, well, picture this (from my own personal experience):

After about three days in a hospital on nearly zero sleep, you finally arrive home. After two more weeks of no sleep, your wife is still limping, recovering from delivery and unable to do much but feed the baby. You have to work 40-50 hours/week now. You have help, and you’re grateful, but people are constantly in and out, and everyone has an opinion. You still haven’t slept. Your wife is still recovering.

Three months go by. Light at the end of the tunnel, right? But…now the baby won’t eat properly. Time for more consultations, hospital visits and checkups. Oh, make sure you bring the burp cloth for the spit-up every 15 minutes.

Another few months go by. Your wife is feeling better! Time for her to work when you get home – the diaper and formula bills are adding up. Putting your feet up and relaxing? Gone. You do playtime, dinner, cleanup, bath, bottle and bed. You’ll be lucky to use the bathroom.

Wait…what am I doing here?  Isn’t this article about how great Fatherhood is?

Let me turn to scripture to clarify my point. In Luke 15, Jesus told The Parable of the Lost Son, known as the Prodigal Son. Though, I’d like to take a specific look from the father’s perspective.

“…A man had two sons [11], and the younger son said to his father, ‘Father, give me the share of your estate that should come to me.’ So the father divided the property between them [12].”

Essentially, the son asks the father for his inheritance money before the father dies. Nice sentiment. Notice: the father doesn’t blink, he gives it all freely. Then, the son goes and squanders it all. He hits rock bottom, to the point of feeding swine, an animal he can’t even eat. It’s pathetic.

As he returns home to beg his father’s forgiveness, the village knows he spent local money in a foreign land. Vengeful, they likely will line up to beat and mock him as he returns to his father’s home as his father was a rich, influential man.

So, what does the father do? His son took everything. He embarrassed him in front of his community – he should be ashamed. He must reject him, or secretly take him in through the back door.

“…While he (the son) was still a long way off, his father caught sight of him, and was filled with compassion. He ran to his son, embraced him and kissed him [20].”

I’m no historical scholar, but I’m pretty sure that first century, older, rich, Jewish men didn’t run. Kids ran. Servants ran to get them things. This father RAN to his son in front of the whole village.

Now, let’s look again at the words of St. John Paul II: “In revealing and in reliving on earth the very fatherhood of God, a man is called upon to ensure the harmonious and united development of all the members of the family…”

Take a closer look at the first half of that sentence. As a father, the man is called to “reveal and relive on earth the very fatherhood of God”.

You want a call? Now that’s a call. Sit with that for a moment.

What does the very fatherhood of God look like? How does he treat us as his children?

In the parable, the father is God. We are his son.

The prodigal son took it all and drained the father’s inheritance. The father gives everything freely, and when the son takes more, the father forgives and gives more. He RUNS to the son.

He is all merciful, slow to anger, rich in kindness, as the Psalm tells us.

Theoretically, many things were taken from me 18 months ago. Sleep, money, time, resources, hobbies, projects, you name it. Having kids is expensive, it’s tiring, and you’ll lose yourself in it. Oddly, I feel utterly grateful and as though I have gained it all.

But…this is the whole point.

“Whoever finds his life will lose it, and whoever loses his life for my sake will find it.”
Matthew 10:39

18 months ago, I was called to fatherhood. My life changed forever. I am called to relive and reveal the very fatherhood of God and to ensure the harmony and development of my family.

This is no small task.

Not a father? This fatherhood is simply an extension of God’s Love. So, if you aren’t a father, you still are in some way called to fatherhood. As Christians, we are all called to the essence and spirit of fatherhood.

We are called to Love.